Showing posts from September, 2004
Show all

My son died for a lie

September 29, 2004
Dear Readers,I don't know how Tony Blair sleeps at night? So many unnecessary deaths of British, American and Iraqi soldiers and freedom fighters along with Italians, Polish, Ukranian and other troops from other nations. Did they have to die? And for what cause? A mother knows the truth. And a grieving mother knows the pain what many others like her, Iraqi mothers and American mothers are going through losing their loved ones and they feel helpless.

A grieving mother asks, "These poor boys are being sent to Iraq to die for this government's lies. Where are the chemical and nuclear weapons they were supposed to be looking for? And if the war was about upholding the UN, why has the UN secretary general now said it is unlawful? Blair hasn't answered that either."

Blair can't answer it. Only more distractions, more polished hyperboles will be given to the public to save his seat and also to keep this sick "establishment" going, and who would wish to be …
Post a Comment
Read more

Sentenced to Be Raped 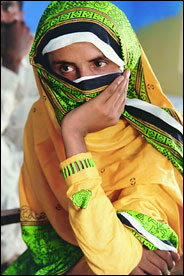 Mukhtaran Bibi, a Pakistani woman whom a tribal council sentenced to be gang-raped.

Dear Readers, There is nothing to be stunned about reading this news, though many of us who do not have the slightest idea on what the earth going on in distant place like Meerwala, may feel completely aghast reading how this type of utterly disgraceful event can occur in a world that boast repeatedly of its glorifying civilization. The world is so much anxious in fighting the "terrorists" who spread fear by their grotesque form of violence mostly against the innocent civilians. But there are other more deadly forms of oppressions seemingly going on for centuries, even more, in so many parts of our world, so many innocent women, men and children are suffering and dying everyday from that criminal aggressions and violence and the economic suppressions, even the governments, the law enforcement agencies in those parts of our globe just look the other way.

I Will Die A Stranger -- a Poem


I will die a stranger
away from family, friends and foes
in a land where no body
knows my name, nobody cares

I will die a stranger
on a day when hurricane will
rush from Pacific, maybe from Atlantic too
a stormy day from coast to coast
there will be arctic flow
from the north dumping snow
in uncaring porches

I will die a stranger
I think my funeral will be attended
by a few unknown men, maybe
one or two women wearing business attire
their presence will be required
for official sacraments inscribed
in "land of free" constitution


Still, clouds drift far above
in shifting shape of fringes
changing from white cottons
to flowing hair of princess

Still, clouds drift far above
sometimes in frenzied thunder
drenching the land and child below
sometimes in mute timidity
tiptoeing like a new bride
in a morning glow

Who am I speaking to?
God or absolute vacuity?
Who am I pleading to?
Fraud or resolute piety?

Who is staring from the mirror
with glare and flare swinging?
Rock and roll dilating error
bringing back frivolous waltzing

Humiliated and Impotent, Every Iraqi is a Hostage Now

September 25, 2004
Dear Readers, In news you see the grim images of Western hostages captured by some part of radical insurgents. These are innocent civilians, went to Iraq in their time of desperation for finding a job, away from economic ruins of their own nations. Killing of these civilians should be condemned without hesitation. However, most news media do not show the other disturbing pictures so clearly. They never did from the beginning of this illegal war. Killings and maiming of thousands of Iraqi civilians, children, women and men, old and young, by the occupation forces' "careful precision", and by the insurgents' ill-conceived attacks. There are so many Iraqi civilians being held by the occupation forces, no one is for sure how many of them are behind the bar. Can they be called hostages? Why are there so much violence and rages among the Iraqis? Was it not predictable before the war? Jonathan Steele's article describes these issues very well.

this is the dress rehearsal

I am Learning to Abandon the World


I am learning to abandon the world
before it can abandon me.
Already I have given up the moon
and snow, closing my shades
against the claims of white.
And the world has taken
my father, my friends.
I have given up melodic lines of hills,
moving to a flat, tuneless landscape.
ANd every night I give my body up
limb by limb, working upwards
across bone, towards the heart.
But morning comes with small
reprieves of coffee and birdsong.
A tree outside the window
which was simply shadow moments ago
takes back its branches twig
by leafy twif.
And as I take my body back
the sun lays its warm …
Post a Comment
Read more

YesterdayBy W. S. Merwin
My friend says I was not a good son
you understand
I say yes I understand

The Foreboding -- 15 Poems of Robert Graves and an article


Looking by chance in at the open window
I saw my own self seated in his chair
With gaze abstracted, furrowed forehead,
Unkempt hair.

I thought that I had suddenly come to die,
That to a cold corpse this was my farewell,
Until the pen moved slowly on the paper
And tears fell.

He had written a name, yours, in printed letters
One word on which bemusedly to pore:
No protest, no desire, your naked name,
Nothing more.

Would it be tomorrow, would it be next year?
But the vision was not false, this much I knew;
And I turned angrily from the open window
Aghast at you.

Why never a warning, either by speech or look,
That the love you cruelly gave me could not last?
Already it was too late: the bait swallowed,
The hook fast.

In The Beginning Was a Word


The difficulty was, it was
Simple, as simple as it seemed;
Needing no scrutinizing glass,
No intense light to be streamed