Showing posts from May, 2007
Show all

Having a few intimate exposures with Canadian hospitals and its nurses and doctors along with long waiting before any surgery dates can be set, and after the surgery the patient being released from the hospital in hurry while droopy eyes, non-responsive legs and shaky feet of loved ones did not invoke any expected sympathy from nursing stations, I thought I wouldn't be surprised reading other news of miseries from conked out health care system in North American continent. My assumption has proven to be flatly wrong. A 43-year old mother of three at Los Angeles hospital, Edith Isabel Rodriguez, died of bursting pain from her 10 exploding gallstones while the entire nursing staff, other medical employees, law enforcement officers and the fellow patients present at the moment on that fateful night simply ignored her teary pleas for help. Her begging and screaming from unbearable stomach pain did not generate any kind of humane emotions from indifferent men and women surrounding he
Post a Comment
Read more

May 20, 2007
There is reason to be concerned. Cheating in classroom, examination hall or homework assignments, are becoming things of the "norm" at universities and colleges around the world "with one study reporting as many as 70 percent of undergraduates admit at least one instance of cheating." How does cheating devalue someone's honestly earned degrees? Here is an answer: "I think the ... more frightening figure is the fact that 20 (percent) to 25 percent admit to five or more (instances of cheating)," said Tim Dodd, executive director of the Center for Academic Integrity, which is based at Duke. "The fact that we have a quarter of more of our students admitting they've engaged in serial cheating does not inspire a lot of confidence about the credibility of their degrees." Credibility of degrees is indeed essential for a student who is not involved with future "leadership's" Enron like deceptions at higher education institutions,
Post a Comment
Read more

Here's Looking at You, Universe

May 15, 2007
There's looking at me, Universe. From here, there, up above, below the ground, in the gusty wind of blooming spring, the Universe is glaring in its infinitesimal cosmic glare, in unperturbed flare.Only 5% of the entire universe is known as the "standard model" that is understood by us, the "intelligent" human beings. The rest is called either "dark matter" or other exotic name, possibly side stepping our own bleating ignorance in the form of long and sinuous equations in improbable permutations. Expanding universe, exploding massive star like Eta Carinae - "a monster of a star -- something like 120 times the mass of the sun, and roiling, heaving, spewing out gobs of star stuff in what may be the prelude to a cataclysmic bang, a supernova unlike any seen before. If it blows, you might be able to read a book by its radiance at night -- unless it fires a narrow beam of gamma rays right at us, in which case all bets are off. One astrophysicist on hand
Post a Comment
Read more

May 10, 2007
Barbara Kingsolver is a writer with tender soul I had observed reading a few of her previously written splendid books. Her personal website has good descriptions on all of her published books. Here is the link: http://www.kingsolver.com/home/index.asp Her recently published book takes a different path, away from vivid fictional characters. Animal, Vegetable, Miracle: A Year of Food Life seems to be a book to read if one wishes to get better understanding on what "food" plays the role in our muddled lives. Here are a few quotes from Janet Maslin's review in The New York Times: “Animal, Vegetable, Miracle” aims to fill a hole in the soul. “ We came a long way, baby, into bad eating habits and collaterally impaired family dynamics ,” Ms. Kingsolver says. “No matter what else we do or believe, food remains at the center of every culture. Ours now runs on empty calories.” She adds: “A lot of us are wishing for a way back home, to the place where care-and-feeding isn’t zookee
Post a Comment
Read more

May 09, 2007
According to the World Health Organisation, 12.5 per cent of all deaths worldwide are caused by cancer, a greater percentage than is caused by HIV/Aids, TB and malaria combined. Cancer is often caricatured as a disease of affluence, one that takes its greatest toll in the developed countries of the Western world. In fact, like so many other diseases, its greatest impact is in the poorest countries, where it heaps agony on top of poverty. Grim statistics. With its miserable poverty, wars and violence among various local and regional tribes and nations, strangling AIDS/HIV amidst the poor population, and overall lack of sustainable commitments from the international communities with meager amount of distributable resources, Africa's "fate" like other despondent places of our world looks bleak to the least. Recent advancements in Cancer research have done "miracles" for many cancer survivors. The cure rate has increased dramatically for many forms of cancers like
Post a Comment
Read more

May 09, 2007
I was perplexed reading the news below that wasn't nationally televised or reported in any mainstream news media to my knowledge. The gruesome reporting that the following article made on this horrific murderous event can rightfully demand its major exposure. What is to fear? Since the victims were "whites" and murderers were "blacks", did that give any reason for subduing and ignoring this news? One probable cause provided by an observer is that murders are so numerous in the United States that it is not realistically possible for the major news media rising them all into the "limelight" of prime media. Only the "sensational" news that will attract national attentions with lucrative profits to follow from sold out advertisements and endorsements are counted in this macabre of analytical calculation. Dead and cold this capitalistic notion is. But unfortunately very cruel truth it is! Regards, Sohel Read the news article from the following l
Post a Comment
Read more

May 08, 2007
A long overdue step to the right direction! People are dying from not able to buy pricey drugs. This is simply not acceptable to the modern human conscience. This is only a first step reducing the price of the drugs. Loosening grip on patents so that cheaper version of generic drugs could be delivered in the developing nations where more rural villages and forgotten towns and cities could be brought under this noble program would be highly appreciated from these parts of our globe. Read the following excerpts: The prices of so-called second-line treatments negotiated by Clinton's foundation would fall on average 25 pct in low-income countries and 50 pct in middle-income countries, he said. His foundation had also negotiated a deal allowing the one-pill-a-day first-line treatment to be made available for less than a dollar a day for developing countries -- a 45 pct saving on the current price in Africa. He also made a dig at pharmaceutical companies who refuse to allow their pate
Post a Comment
Read more

"Banker to the Poor" gives up on political mission

May 04, 2007
The Banker to the Poor abandons his grand ambition of creating a new political party in Bangladesh. He had envisioned a party that would be completely different in its outlook and structure, away from the daily violence and corruptions entrenched in every political layer of this impoverished nation. Professor Yunus who had won Nobel Prize in Peace for 2006 and achieved huge attentions from around the world including bringing tremendous pride and joys to hundreds of millions of Bangladeshis, poor or rich, had made a few pragmatic suggestions last year in the middle of Bangladeshi political instability and unstoppable violence "calling on the leaders of the two major political parties to sign a peace accord and form a coalition government whatever the election results. Yunus presented a draft proposal, according to which the losing party in the election would still get one third of the posts in the cabinet. The tenure of the coalition government would be one year and it would b
Post a Comment
Read more

May 03, 2007
Perhaps it does not change "the fundamental of an economy", but it surely boosts more confidence among global investors now that India has surpassed a psychological milestone "trillion dollar economy", only 12th nation to do so. Here is the reason behind India's recent surge in economy: "..... domestic consumption remains the primary driver of India's economic growth, investment is only a nose behind. Investment rose to nearly 34% of gross domestic product last year -- a sign that the country is building the capacity for higher rates of non-inflationary growth." What does it mean for India and the neighboring nations in that parts of the world where rampant poverty still rules amongst a large segment of population? Would it lift them from the endless miseries of their daily struggles? Let's hope it does. Otherwise, this "milestone" shall remain as a symbol of global shame where poverty rocks an empty stomach on the same street where
Post a Comment
Read more 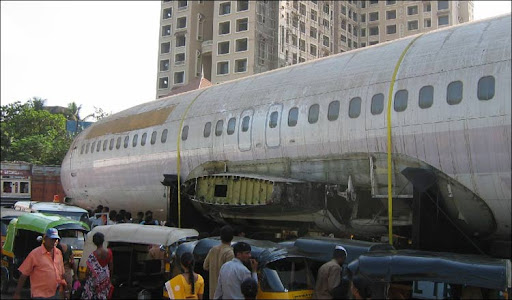 A strange story from India. See the photo below. A giant Boeing 737 lost its destination and is abandoned on a busy street of Mumbai, one of the largest cities in India. Now the question is: "Who is going to move it"? 'So... who's gonna move it?' Regards, Sohel
Post a Comment
Read more
More posts