Showing posts from 2018
Show all

"Poking Nose" in the Case of Human Rights is Everyone's Business

August 07, 2018
Bangladesh Information Minister Hasanul Haq Inu termed the U.S Embassy's rightful statement regarding the beating of students in the peaceful protests as "poking its nose in Bangladesh's internal politics in an indecent way" - that does not sound coming from a minister of a democratically elected government, representing a nation which is also signatory of the Universal Declaration of Human Rights.  Here is what US Embassy in Dhaka had stated in its Facebook post: " Nothing can justify the brutal attacks and violence over the weekend against the thousands of young people who have been peacefully exercising their democratic rights in supporting a safer Bangladesh" US Embassy as everyone one else has the right to speak against any brutal attacks and violence on unarmed middle school, high school and university students that did happen mostly from Saturday.  There was no need of this reprehensible crackdown. Students were protesting peacefully, t
Post a Comment
Read more 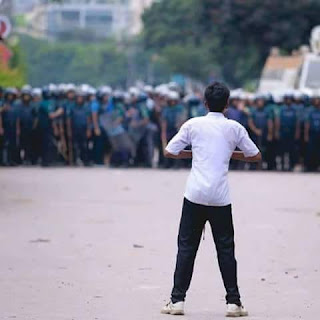 Nah! It's all rumor, lies and deception The earth is flat and the sun moves around We never gone to moon, all fabrication Only the words of throne hold the ground Didn't they tell all will be well and good? Goons will not beat the innocents with sticks And machetes but will bring delicious food Dangerous roads will be cleaned, free of freaks You have the full freedom of expression Can say anything, do peaceful protest No one will imprison you, commotion Will not be the norm, nor be the pretext To maintain the peace and tranquility Of a loving "desh", full of fragrant rose Where ministers serve with humility and kisses, so alive! Not comatose Where the people have the backbone intact Not afraid to say what has to be said And the children can learn, play, and react Running boys and giggling girls with black braid --------------------------------------------------------------- August 6, 2018 Mahbubul Karim (Sohel) This satirical poem is ded
Post a Comment
Read more

Bangladesh - What is Happening? Teenage Students Struggle to Have Safer Roads

August 05, 2018
We live in the age of internet when quick communications through social media is the norm. Some of these news sources look to be true and some of them seem to be dramatized to pursue an ulterior agenda. Seeing various news sources, including some videos and news articles regarding Bangladeshi students protest movement that started last week after at least two high school students had lost their lives when a bus hit them while they were waiting to get on the bus, I am trying to understand actually what is happening in Bangladesh, a country where I lived my nostalgic childhood, where my siblings, parents, grand parents, cousins, uncles, aunts, long gone ancestors and many of my close childhood friends were born. This particular tragic event stirred a movement among the students whose demand is to have safer roads in Bangladesh, where thousands of people die every year from road accidents and many of them are students going to school or returning home from school.  When I was growi
Post a Comment
Read more

June 09, 2018
Modern nation states need trade. The unprecedented prosperity, stability and peace that exist in majority of world nations, except some heartbreaking war zones, need uninterrupted trade between nations. The recent tariff set by various nations that hurt a wide segment of the business world, and eventually the general populace bear the cost. It's not productive. It does not bring peace in the end. Historically, from ancient time to recent memories, violent wars broke out among various nations due to miscalculations, misinterpretations and to placate domestic political constituents. The legitimate and sometimes not legitimate fears of rising nations by the nations with the most global or regional power at the time, put otherwise friendly nation states at each other's throat. It begins with manageable small skirmishes, then it expands to larger battles, and full scale war as it happened during First and the Second World Wars, costing the lives of millions of innocent people, de
Post a Comment
Read more

Astrophysics for People in a Hurry by Neil deGrasse Tyson - Review

March 26, 2018
Astrophysics does not need to be filled with the unexplained technical jargon that only specialists or very keen readers can decipher. Neil deGrasse Tyson is one of the finest astrophysicists who, like another prominent astrophysicist before him named Carl Sagan, has mastery in explaining complex astronomical concepts and mysterious cosmic phenomena in a tone and accessible language that most readers can grasp. I am glad I have read his "Astrophysics for People in a Hurry". The title kind of indicates that it's written for a quick review of astrophysics. It's true, but it also gives an illuminating glimpse of our mysterious universe and an urgency, like the word "hurry" to have some sense of our very existence. From the very start, the 0th time of big bang to all the way of 21st century's era of technological marvels, Tyson gives a good synopsis on how everything came about that surround us every moment but most of us remain oblivious to its origin.
Post a Comment
Read more

Homo Deus: A Brief History of Tomorrow by Huval Noah Harari - a Review

March 15, 2018
"Homo Deus: A Brief History of Tomorrow" is a very well written book, a sequel to Yuval Noah Harari's magnificent "Sapiens: A Brief History of Humankind". The writer's accessible way of explaining the technical and societal trend and unmistakable destination where humanity is heading to I found to be exhilarating but sometimes frightening too. It is fearsome to think about a world where humanity as we know of does not exist, but supplanted by unconscious intelligence, far superior than human beings could ever imagined to be. To reach his striking conclusion Harari showed how we treat other animals with utter indifference toward their pain and sufferings, even farm animals for food as if only for that reason their existence is justified. Humanity boasts its pureness, its love toward goodness, but these goodness does not apply to the animals as we treat them having lesser intelligence. As the writer argues, when we reach that inevitable point when artificia
Post a Comment
Read more

February 25, 2018
This is the second novel I've read written by Eowyn Ivey. Like her " To the Bright Edge of the World ", The Snow Child is a memorable story based in Alaska's snowy wilderness. The pain and anguish of a childless couple in Alaska's cold winter, their yearning for a child in the depth of wintry chill leaps out of the early pages of this empathy filled novel. It has the mystical elements along with its detail description of Alaskan lively nature. At first it seemed it would be a novel filled with magic and fantasy, but it turned out to be celebrating the life's joys and also facing the inevitable griefs. So good the writer's description of Alaskan natural world that I felt I was right there in early 20th century, beside a stoked fireside where chopped woods were crackling in fire. The gist of this mesmerizing story begins when Mabel recollects a memory of her father reading her a book when she was a child, it was the story of a Russian snow maiden that c
Post a Comment
Read more
More posts