Showing posts from September, 2017
Show all

September 22, 2017
Rocket man goes Look at me, look at my shiny toys They fly higher, girls and boys I am the scariest, craziest loon Can eat ice cream without the spoon My dancing is the best and daring As my frown frazzles the fools blaring Idiotic tirade at me and my people Who have freedom like the best sheeple Con man goes Look at me, look at my grimy palm While I scare the hell out of calm My toys are bigger, stronger, snappy I have the smartest brain from almighty My loud mouth is the coolest and caring As my cold stare rattles the louts flaring Nonsensical protests at my twittering policy I love liberty and life for the docile polity A toddler goes Toddle, toddle, toddle I am walking! Don't befuddle! Cuddle me! Hug me! Me! Me! Me! Me! Feed me and stop watching TV Daddy! The Rocket and the Con Man Are too naughty to play
Post a Comment
Read more

September 10, 2017
Good pointers from a Forbes article regarding success: "Do what you are passionate about. Without passion, your work is not your love and you can never be your best or be better than others who are running with their passion." "Do something that you are inherently good or talented at. We all have our relative talents but spending your life doing something that is inherently more difficult puts you at a disadvantage to other more talented people." "Do something that creates value and can be sold into a market present or future. Creating a widget that nobody but you wants may be self satisfying, but it certainly is not going to make you your fortune nor lead you to personal or professional success." Here is another quote: " It’s simply a determination to never ever give up. That is the most important element of success: dogged determination.  "
Post a Comment
Read more 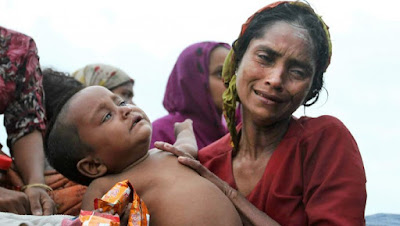 Photo source: https://4.bp.blogspot.com/-PRHvIr4BUxA/Vz38rBBbXsI/AAAAAAAA6Sw/dJcigfGywzYAPhY2h9jD3_sVpH5ZlsYCQCLcB/s1600/r1.jpg They are uprooted from their burnt out villages. Their schools are demolished. Homes are ransacked and bombarded. Malnourished children fleeing with persecuted parents. The faces of traumatised Rohingyas, begging, pleading for help. Thousands of them drowned in sea while attempting to flee by boat and many more died in jungle camps, many of these are run by brutal people smugglers. And when the news of ethnic cleansing started pouring out of Myanmar, the Nobel laureate Aung San Suu Kyi's response was shocking as she takes the trumpeted "fake news" to brush aside the concern. How easy has it become to brand any valid concerns and the gross violation of human rights of citizens as "Fake News"! Aung San Suu Kyi is respected worldwide because of her historical struggle against the military dictator of her nation and her success to
Post a Comment
Read more

The Underground Railroad by Colson Whitehead - a Book Review

September 03, 2017
At first, I didn't want to read this book despite its winning the Pulitzer Prize, National Book Award along with other distinguished accomplishments. Having read a few of the great books earlier that described the horrors of slavery, its aftermath, even the continuation of its thread in various forms into 20th and 21st century, I thought it would be a tale of endless brutality and human deprivation that I can pass for now. After reading Colson Whitehead's "The Underground Railroad", my initial assessment of grimness was justified but in the end I was glad that I had read this great novel. It's a story of a slave girl Cora, who was born and raised in a Virginia plantation. Her grandmother Ajarry was abducted from an African nation, along with many other men, women and children, with the help of fellow Africans and sold to slave traders who took them into the new land called America that she knew nothing about. Ajarry was sold and resold many times before settl
Post a Comment
Read more
More posts