June 03, 2020
The protests in America are live streamed for more than a week now. Images and videos are vivid. Mostly peaceful protesters are marching on the streets with placards, shouting slogans together: "No Justice, No Peace", "Justice for George Floyd".
I have seen people of all colors, races, ethnic origins are walking, Blacks, Caucasians, Latinos, Asians, Africans, Native Americans, everyone out on the streets, singing, reciting inspiring poetry, distributing water, where many are holding up signs saying "Black Lives Matter".
Police presence is everywhere, as it should be. The primary task of police force anywhere in the world is to keep peace, preventing the break down of rules that any civil society is based on.
One good news arrived. At last, after more than an agonizing week of protests, peaceful and violent, in America along with the unified solidarity shown around the world, all 4 fired police officers are now charged in George Floyd's murder case. Couldn't this be done earlier? The slogans in the protests that I'd seen were demanding justice: "No Justice, No Peace!" - is this an unreasonable yearning? 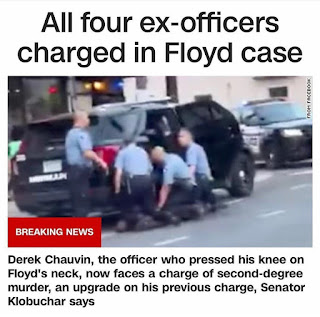 George Floyd's 6 year old daughter, Gianna came to a news briefing, innocent and grief stricken, clutching her crying mother's hand. As her mother said, she will be growing up without her father. The pain Gianna and her family are going through is very real and hits closer to home for many if not all, like a father like me of a six year old boy. Little Gianna said, “Daddy changed the world”. Yes, he did Gianna. I wish he was alive to see the outpouring of heartfelt support, tears and love. 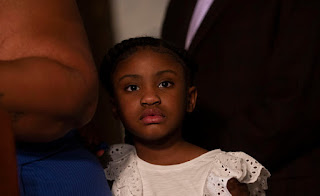 Black Lives Matter! This simple statement does not nullify the universal statement: "All Lives Matter". Without protecting the vulnerable segments of a nation, may that be in America, Canada, Mexico, Brazil or Afghanistan, Bangladesh, India, Pakistan, Myanmar, Sri Lanka, Egypt, France, Israel, Palestine, China, whichever that nation is, ALL lives, in reality, are not treated equally.
One simple analogy for those who seem to me do not comprehend the significance of "Black Lives Matter" movement is this: just think about a neighborhood, anywhere in the world. Say there is a fire in a house. Fire fighters come to put off the fire, and ask all people congregating in the neighborhood, "which house has the fire that needs protection"? The most precise answer would be to pointing to the very house that is on fire, that needs the most protection right that moment. The wrong and the answer with abject indifference would be, "All Houses Matter", meaning don't point out to the exact house, but protect all houses right that moment. How ridiculous this answer sound to you while the fire engulfs a particular house?
Another simple analogy is this: Say you are sick. You have broken your left arm. Your arm needs fixing, but now everyone you know starts yelling, "All Arms Matter", broken or not. How is that unreasonable demand helpful to fix your broken left arm while you are in tears from unbearable pain and suffering?
Black Lives Matter movement is important as it acknowledges the very real problem exist in America, and also it inspires to resolve the problem, so that the same brutality like George Floyd and many others faced do not repeat. This movement is also inspiring others including the disadvantaged segments in other nations to speak up, to get out of the silent and violent complicity.
Police force is vital to preserve peace. This is an essential service. Without rules a society breaks down. Police force consists of people from the nation. They are someone's father, mother, brother, sister, wife, husband, son and daughter. They are part of the civil society. They are not the enemies. The entrenched system that do not want to change is the problem. Without having fair justice a society breaks down anyways in the end. Some segments of society, for example, the blacks and browns and natives in America, are indeed subjected to daily discrimination and racism.
This is also true in other parts of the world including Canada where the Prime Minister Justin Trudeau and his predecessor Prime Minister Stephen Harper both acknowledged this truth.
Discrimination is based on color of skin (racism), or on how much money and status you have in the society, or based on a person's religion or lack of faith or sexual orientation, or any other shallow differences that can be exploited. All of these are reprehensible.
With all its faults, problems, political and societal issues, America still is, in my humble opinion, one of the best nations to live in, due to its freedom of expressions that, unfortunately, is not the same in many parts of the world, however, it is indeed a nation filled with problems that must be addressed.
Just imagine the same level of protests happening in China or India or Pakistan, or Bangladesh or Syria or Palestine. How much bloodshed there could be. Can you imagine?
In recent days the alarming news emerging from its most powerful man, Donald Trump, seemingly glorifying violence and incitement, is definitely painful to watch. But the civil society are out in force and can state openly what they think, against or for, and can vote freely to elect its government, I understand fairly. Can this be said the same for other nations with a few exceptions?
I wish all these ex Police officers in Minneapolis were arrested and charged earlier as that could have addressed the question of deeply seated unfairness and racism question better. Still it's a positive development. Looting and violence as a form of protest do not help in the end, though I admit looting and violence can shook more people in sudden jolt from perpetual slumber. I can understand the deep frustration and economic desperation that can push someone to that illogical direction. However, looting and violence in any protests weaken the noble cause, as it gives strength to the naysayers, emboldening the solidified discriminators more. Gandhi in India in his fight against the British Colonial system pre 1947 in Indian subcontinent and Nelson Mandela in South Africa during the notorious apartheid time, followed and inspired non violence based movement, that had brought real changes in the end. However, one can also argue that there were also violent elements active in that time period including in India and South Africa.
Black Lives Matter! In the end I am hopeful like George Floyd’s six year old daughter Gianna saying “Daddy changed the world”, all these protests will act as a wake up call in the civil society, will bring the necessary changes in law enforcement and also in public and private, small businesses and large corporate culture, where subtle and blatant racism and all forms of discrimination will be uprooted once for all.
One can always hope for the best, can't he? Sometimes, I hope often time, even fairy tale may come true, right? I love to read Langston Hughes' immortal poem "Dreams" as often as I can:

Black Lives Matter because without protecting the vulnerable and oppressed segment of a nation fairness cannot be achieved nor peace can be sustained, then in all fairness and  in reality, All Lives Cannot Matter.